The following is an analysis of the autonomous car, published by Automotive News Europe

Are battery-powered electric vehicles a viable business case not only for the automakers that will sell them but also for the people who will buy them? Is autonomous driving science fiction or a reality that is closer than we expect? Will these changes result in a new form of on-demand individual mobility that forces automakers to restructure their sales and production operations and causes customers to reassess their views on car ownership?

All these questions could be answered very soon if a futuristic environment that Morgan Stanley Managing Director Adam Jonas calls “Autopia” becomes a reality. Jonas shared his vision at the Automotive News World Congress in Detroit last month, and let’s just say that he didn’t paint a very pretty picture for traditional automakers.

Jonas said newcomers — such as Google and Apple — are just as smart and better funded than their potential rivals from the automotive field. Even more important: these companies see the business differently. Here’s an example of how different the views are. Automakers see the global market as 80 million vehicles sold at an average price of $19,000, resulting in sales of $1.5 trillion. Silicon Valley’s sees a global market where 10 trillion miles will be driven a year at $1 a mile resulting in $10 trillion in revenue.

To put this into perspective, $10 trillion is equivalent to about 14 percent of the global economy, Jonas said. Noting that 10 trillion miles is 1.6 light years, Jonas quipped, “It’s an astronomical business” that will only get bigger, making it too big to resist for business-savvy newcomers with deep pockets.

Jonas’ scenario makes it a lot easier to understand why CEOs such as Ford’s Mark Fields and Daimler’s Dieter Zetsche are already pushing their companies to become “mobility leaders” rather than just automakers. Historically, change has happened slowly in this industry, which has spent more than a century building, selling and servicing vehicles. There appears, however, to be a need to speed up this move because of the massive amount of potential cash out there.

Using Toyota as an example Jonas said the world’s largest automaker has a global market share of about 13 percent on annual sales of 10 million vehicles. From that Toyota generates $230 billion in revenue. Meanwhile, a car-sharing company that captures a mere 1.5 percent market share of those 10 trillion miles traveled annually and charges customers $1.5 a mile would have $225 billion in yearly revenue.

In the past, the enormous capital cost to enter the automotive sector kept companies away. Today, the price to join the competition is more manageable, Jonas said, because of two emerging trends: the move to shared ownership of vehicles and the forthcoming arrival of autonomous vehicles, which won’t require drivers.

Jonas also sees electric vehicles benefiting from the new business models. “Driving 10,000 miles a year in an EV means it would take 28.5 years to break even,” on the investment in the car, Jonas said. “But if a shared EV is used six hours a day, it drives 60,000 miles a year and that’s a 4.6-year payback. Now I’ve got a business.”

Jonas said traditional automaker executives “all say the same thing, that ‘we’re going to lead’ ” the industry transition. He thinks the industry is well prepared for autonomous vehicles — but not for a significant change in individual ownership patterns. “Automakers have capital, they have smart people,” he said. “But it might require out-of-the-box thinking to make the transition.” Fiat Chrysler Automobiles CEO Sergio Marchionne does not see a bright future for car sharing, nevertheless, he fears that a Jonas-like Autopia would severely damage traditional automakers.

“If we all think that car sharing is going to become the way in which people will utilize transportation –which I don’t think is the case — it’s going to have a drastic impact on production,” Marchionne said on the sidelines of the Detroit auto show last month. In his view, such as change would result in a massive, disruptive restructuring of the auto industry. “This,” he said, “is not painless.” You can reach Luca Ciferri at lciferri@crain.com.

One thought on “The race for the autonomous car, manufactured in series, ends by 2020” 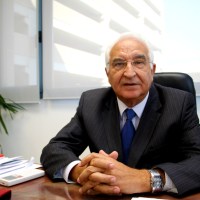